Cannabis Tolerance Breaks: A Preview/Excerpt From The Newbies' Guide To Medicinal Cannabis

Cannabis Tolerance Breaks:
When It's Time For A Time-Out

At some point along the cannabis consumption journey, regular consumers may find that a tolerance break is in order:

<the following is a draft excerpt/Work-in-Progress preview from our upcoming book ~ comments & feedback welcome :->

What Is A Cannabis Tolerance Break?

A tolerance break is a period of abstaining from (or sharply limiting/decreasing) cannabis consumption (after an extended period of regular/daily use), primarily to downregulate the body’s cannabinoid receptor system. Other reasons people take tolerance breaks include personal growth (a t-break can be a useful barometer of one’s healing/progress), job/employment, finances, travel, etc. It takes about 2 days for the body to adjust and regulate the amount & availability of cannabinoid receptors to compensate for a decrease or deficit in cannabis. Upon resuming cannabis intake, many people find less herb is needed than before the t-break. During a tolerance break there may be some physical or mental/emotional withdrawal symptoms (often relatively mild but could be potentially challenging), and people with borderline/intense conditions (or intensive medication regimens) may want to proceed with special care. 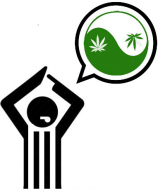 According to the model first propagated by Dr. Ethan Russo in his pioneering research on Clinical Endocannabinoid Deficiency, there is an ‘optimum operating range’ of cannabinoid levels which differs from person to person and can vary real-time based on current environmental conditions, systemic needs etc. (for example, cannabinoids are used by the body as a neuroprotectant and healing/repair agent, so one might assume that during times of neurological stress or trauma the consumption/need/threshold for cannabinoid consumption could increase beyond usual levels).

One of the functions of the endocannabinoid system is to help maintain homeostasis (systemic balance aka optimum operating range) - the body has the ability to upregulate or downregulate (by either adding or removing/withdrawing/hiding) cannabinoid receptors to meet the body’s needs for cannabinoids at any given time.

When consumption is above personal optimum range, you start requiring more herb to achieve the same effect, as your system is awash in cannabinoids and removes/prunes/hides receptors so you don’t get overloaded. When your system has a deficit - for example at the end of a tolerance break - your body adds and/or re-exposes more cannabinoid receptors, so when you re-introduce cannabis your body is more sensitized therefore you often need less herb to achieve the same effect.

Studies (with daily/regular consumers and a control group) have measured (via magnetic imaging of CB1 receptors) how long it takes for the cannabinoid receptor system to downregulate - in a majority of cannabis users there’s a big difference in cannabinoid receptor availability between baseline (a few hours after a regular/typical dose: neither super-high nor in withdrawal) and 2 days, but no statistical difference between 2 days and 28 days. Therefore the minimum physiological time needed for a tolerance break is approximately 2-3 days. (If doing a t-break for personal growth - i.e. to challenge yourself, test your sea-legs without cannabis, or other reasons, you may want/need more than 2 days - 2 days is the average length of time needed for cannabinoid receptor density & availability to level-out & return to pre-consumption levels.

Get the whole story on tolerance breaks in The Newbies' Guide To Medicinal Cannabis by The Da Ma Collective! 大 麻  Pre-order your copy!